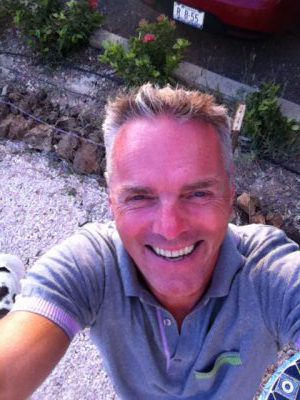 Born and raised in beautiful Twente, on my 20th I moved to Amsterdam, the magic capital of the country, I went to study Law. During that time, I had a job in retail, and after my graduation, I did not work as a lawyer, but started working as a manager of the Herzog fashion store. I later became a companion, and eventually became the only owner. Meanwhile, auction house Herzog Leidsegracht also saw the light of life, a trade in beautiful old furniture, paintings and artifacts. Decor, art, and architecture were always my passion.

When I was in my early thirties,  I discovered Curacao, also by the language so clearly a part of the Kingdom, with the many beautiful Dutch country houses, the fort Amsterdam, and the QueensBridges. My dream was to start our own little lodge at the beach, with my boyfriend , on the island, while our doggies  were scrambling around. It has taken more than 25 years, but that dream has now become a reality, because from early 2017 my beloved Edwin and I, with our dogs Eppel and Soekie, live on Curacao, and in October 2017, Corazón Apartments will open its doors. 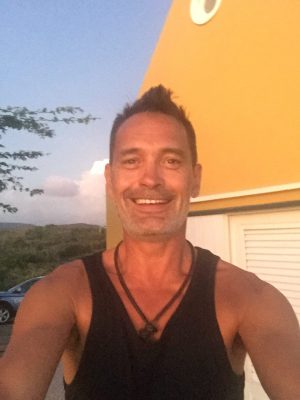 After fifteen years as a creator for the three best travel programs on television (Yorin Travel, RTL Travel and 3 on Travel), it was time for me to look for new challenges. Curaçao stole my heart five years ago when I was here on holiday and spent a while in the non-tourist area: Banda Abou. I realized that I could only think of one thing: “How do I trade my life in the Netherlands for an adventurous existence in this beautiful tropical place?” From that moment it was clear to me: here we are going to live!

During my work for travel programs, my love for beautiful accommodations has come true. In addition to my love for traveling and dogs. With Corazón Apartments everything is in place! At our magical location in Banda Abou, the passions of Dick Jan and me come together: a self-created place where we can receive guests and live with our two amazing dogs, that have lots of space here. In addition, I work as a volunteer for the Feed Feed Foundation, which cares for street dogs. Traveling in the last few years I have done so much that my holidays will take place in the Netherlands. However, Curacao has enough flights to other destinations in case the travel virus hits again. And when there is more time I want to learn to dive at one of the diving schools near here, I’m going to learn Papiaments, the language spoken by locals besides Dutch, and I want to see even more of the Caribbean together with Dick Jan.